Borderline had plenty of opportunity to attract attention at a recent outing at Oneroa Bay on Waihiki island.

Everyone wanted to know her story and I did my best to oblige.  Oneroa has to be one of the most beautiful places on the planet. What a great day! 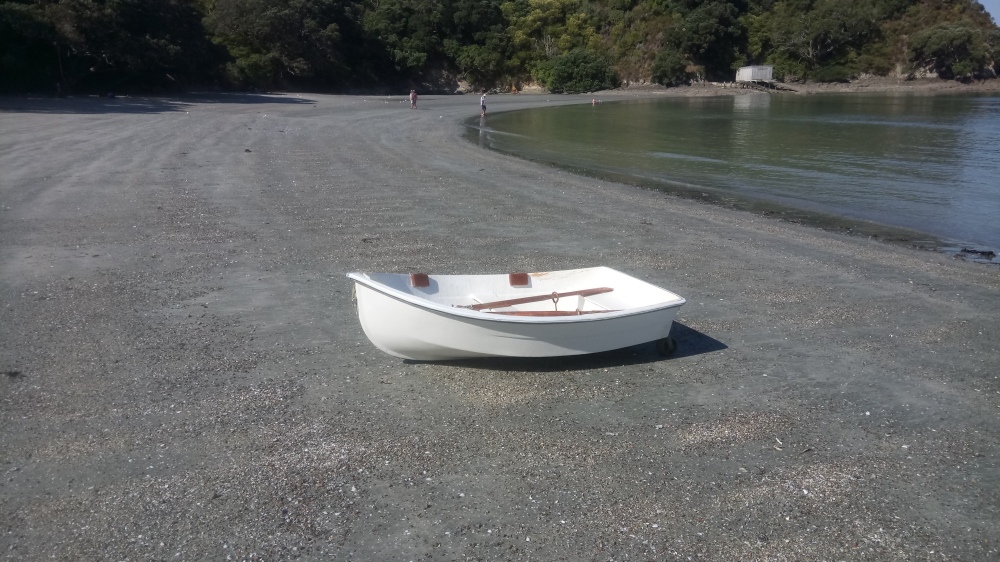 Over the years I have been involved in hundreds of engineering projects.  One thing all those projects had in common was that the general public didn’t give a damn about any of them.  Imagine my surprise to now be involved in a project that people are actually interested in.

I received multiple visitors and got into some interesting conversations with people like my anchor buddy David with his classic launch Feather. 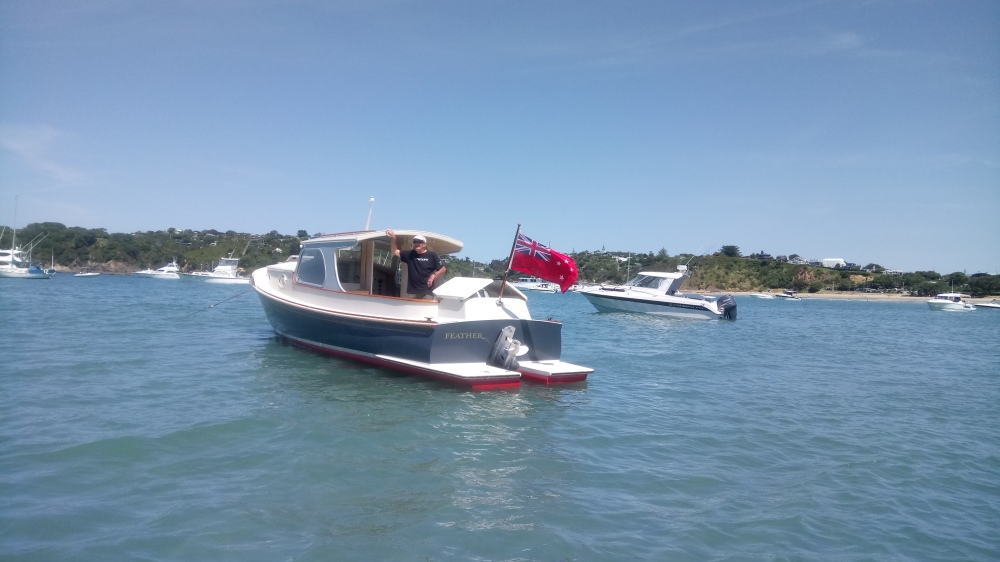 These paddle borders had lots of great ideas also.  Another David:

As usual, I made many outrageous claims. One of my claims that seems to regularly raise eyebrows is my contention that the gasoline fuel distribution will soon collapse leaving boaties with no option but to switch to electric boats.  It all depends, of course, on the uptake of electric cars.  Are tomorrow’s electric cars really going to be that much better than fossil powered cars?

Rather than talking about boring things like energy consumption let’s talk money. Money is something that we all understand.  What I did was to take the price of gasoline and remove the tax.  I then compared the gasoline cost to that of electricity.  If we drive from Auckland to Whangarei and back, the gasoline without tax would cost $32. If we take the same trip in an EV, the cost of electricity (also with no tax) will be $16. That’s right; the fuel cost for electric cars is almost exactly half the fuel cost for gasoline cars.  If you don’t believe me you can read the “boring part” below where I do the calculation.

Another thing folks regularly worry about is what happens to the grid if all cars switch to electricity?  Surprisingly not all that much.  EECA estimates that the increase in electricity consumption if all our light vehicle fleet were switched to electric would be an increase of 20%.(1)   The Tiwai Point smelter uses 13% of New Zealand’s electricity.  When it finally closes, we will have only a 7% shortfall in electricity.  Switching to electric cars in New Zealand will be no problem at all.  I suspect that many EV owners will install solar panels to charge their cars and forget about the grid altogether.

As for reliability, in 10 years, car mechanics will be as scarce as TV repair men.  Drive trains for electric cars have far fewer parts than a piston car and those few parts are subjected to very little vibration and heat unlike the piston engine drive train.  EV drive trains will last and last.

So there you have it.  The boating industry is on notice.  Piston driven boat engines are a sunset industry. I don’t see Mariner or Caterpillar making any moves toward electric marine propulsion.  While those big boys are napping, the unknown electric marine propulsion manufacturers are studying at the school of hard knocks.  Once they solve their problems, it will be difficult for the dinosaurs to catch up.  Remember all those great English motorcycles that you had to kick-start?  They are all gone because they simply refused to accept that change was upon them.

Inventor, entrepreneur and engineer with a love of alternate energy and the sea. Solar boat and solar electric boat enthusiast.
%d bloggers like this: